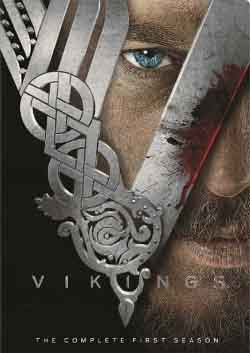 Story… Vikings transports us to the brutal and mysterious world of Ragnar Lothbrok, a Viking warrior and farmer who yearns to explore – and raid – the distant shores across the ocean.

I’ve been looking forward to a viking film or TV series for many years, and when my wishes were finally granted, I was very worried that this production was going to be total crap. After viewing the first two episodes I do not worry about that anymore. Thank you, Odin:-)

As a person of some historical knowledge of the viking era, I can point out numerous flaws – but they don’t ruin the story for me, so I will let them slip. Historical accounts about those days are, after all, not entirely reliable.

Happy to see Travis Fimmel in a role that totally suits him. A physical and intense character, with that spice of humor that is the viking trademark from the sagas. Gabriel Byrne plays a stern leader, that made me think of him in “Prince of Jutland”, and Clive Standen seems like he’s going to surprise us.

Been pondering the Game of Thrones comparison, since I love that show too, but in my opinion Vikings has its own thing going on. Way fewer lead characters to begin with, and also a more straight forward approach. Plenty of room for more series with this high class!