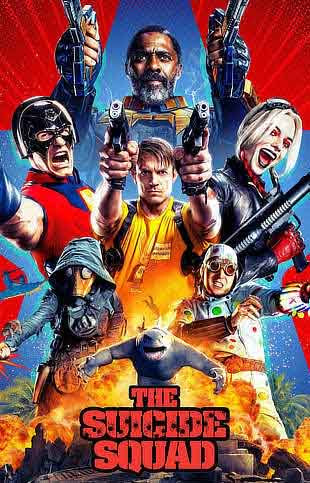 Story… Supervillains Harley Quinn, Bloodsport, Peacemaker and a collection of nutty cons at Belle Reve prison join the super-secret, super-shady Task Force X as they are dropped off at the remote, enemy-infused island of Corto Maltese.

I enjoyed some parts of the film, but a lot of the jokes didn’t land for me. The film also has these little pauses in the action where it thinks you should laugh. John Cena struggles in his role. Bloodshot was a good character. There are some good moments here, just don’t go in expecting it is going to be a masterpiece. Feels too long on occasions.

The moment I saw James Gunn’s name I knew it would be a good movie! He made the Guardians famous and saved the suicide squad. The characters were all great, funny and weird, exactly how the suicide squad should be. I hve no words, it was easily one of the best DC movies I’ve seen the last few years. More of that DC, give us more of that! I enjoyed every minute of it and I recommend everyone who didn’t like the first movie to give this a chance.

Somehow the characters in this movie are more likeable and memorable than 90% of every other DCEU character. Although a lot of the characters were killed without being utilized, there are some plot meh moments here and there, but it also has it’s good moments. All the scenes is very dynamic and wack. I don’t remember the last time I’ve enjoyed a superhero movie this much.