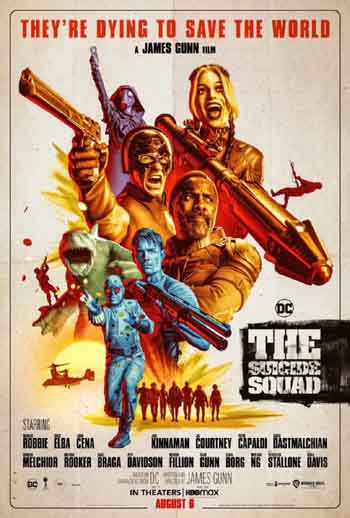 Story… Supervillains Harley Quinn, Bloodsport, Peacemaker and a collection of nutty cons at Belle Reve prison join the super-secret, super-shady Task Force X as they are dropped off at the remote, enemy-infused island of Corto Maltese.

I’m so much lucky that I got to see the movie so early, many many thanks to my you tuber friend John.

Now let me come to the movie,, As I said in the title, the movie was full of life and colour. You can just pause the movie at any time, take a screenshot and it could be a great wallpaper for your PC. I was just looking at the screen and just thinking how the hell did James made this movie, maybe with magic… I didn’t get bored for one second. The movie just attaches you with it. But, don’t get so attached, ’cause you’ll fall in love with the characters and you’ll have to see them suffering.

Before 30,35 minutes from the ending you could think that, okay, it was a great experience, but now maybe it needs to be end. But just wait a few more minutes, you’ll just shock and then you’ll never want it to be end. You’ll say I want more. The actions were so unique and dramatic. I loved the chemistry between the characters especially Bloodsport and his daughter( and it was far better than deadshot & his daughter’s story from the first movie). And King Shark, oh my goodness, he was just great, he was just bringing life to the movie with his every appearances. You can just see that the actors worked so hard for their rolls.