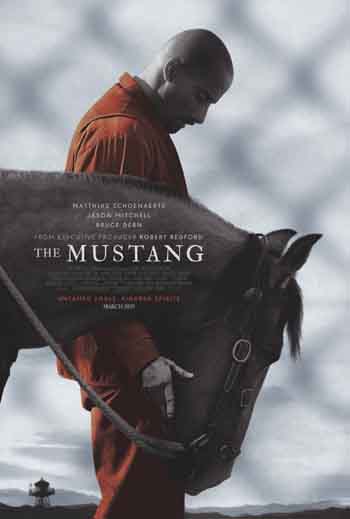 Story… While participating in a rehabilitation program training wild mustangs, a convict at first struggles to connect with the horses and his fellow inmates, but he learns to confront his violent past as he soothes an especially feisty horse.

Overall “The Mustang” is entertaining if you know little or nothing about how horses really behave. The movie is created to tug at our human hearts at the expense of humane horse management and training. For instance there is no way that the horse once released into the wild will every come close to that prison again, rather it will find a herd to join up with. In true movie making style each scene is created to “wrangle the heart” of the viewer, not realistically but with intensity and drama. Working with horses takes time and much patience, which understandably can’t be squeezed into a feature film. So saddle up, enjoy the movie and then learn how to really work with and train horses.

At first I thought this film would be boring and like a docudrama but it pleasantly surprised me. The directing is superb and the story moves at a fast pace capturing your attention with some great shots and a musical score that was fantastic. The main actor from Belgian carries the film and reminded me a lot of his character in Bullhead so it was nice to see good character arcs by the writer, and the supporting actors made the film feel more complex and entertaining. It will definitely be worthy of some nominations as it has a feel good message and a charming ending. I rarely give films a 9 but this little gem deserves it. Kudos to the Director and team.