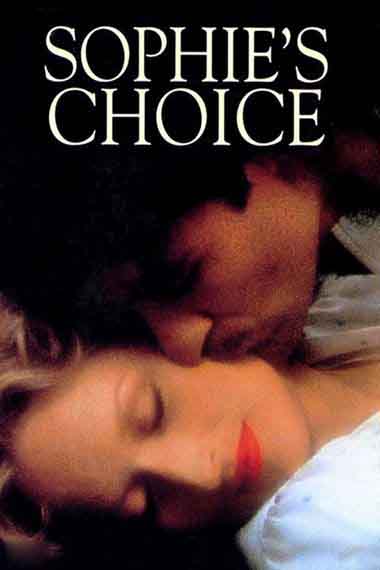 Story… Sophie is the survivor of Nazi concentration camps, who has found a reason to live with Nathan, a sparkling if unsteady American Jew obsessed with the Holocaust.

It’s 1947. Stingo (Peter MacNicol) moves from the south to Brooklyn trying to be a writer. Sophie Zawistowski (Meryl Streep) and Nathan Landau (Kevin Kline) are his amorous volatile couple and upstairs neighbors. She’s Polish Catholic having survived Auschwitz and haunted by a heart-breaking secret. He works at Pfizer and is obsessed with the Nazis. The movie has long flashbacks that reveal Sophie’s past and secrets.

It’s a very slow moving movie at times. It meanders and teases for the first hour. It can get tedious at times. There are some interesting bits like Dickens and Leslie Lapidus. The three actors are superb but they can only hint at the final explosive reveal. The reveals are compelling bits of the puzzle. Streep is impeccable transitioning between the various languages. Kline does a good deteriorating personality. MacNicol gives a solid performance to give the audience a voice. Of course, the climatic scene is heart wrenching iconic cinematic history. The piercing girl’s scream is devastating and it shows on Streep’s face.