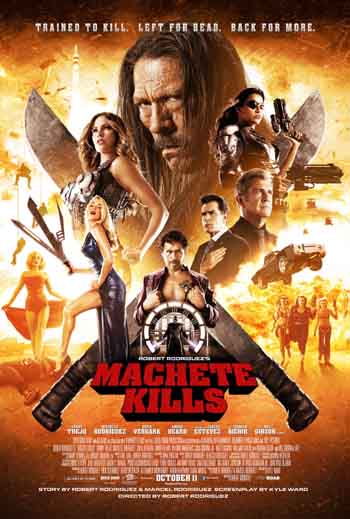 Story… The U.S. government recruits Machete to battle his way through Mexico in order to take down an arms dealer who looks to launch a weapon into space.

The first MACHETE film was a slightly disappointing B-movie. It should have been easy enough to get right, but I blamed the film’s lack of entertainment value on the presence of a no-name director. This sequel has Robert Rodriguez at the helm, so I was hoping for something a bit better, but what we get is more of the same.

The problem with these films is that they’re just too deliberately silly to succeed. They should have been played straight so that the viewers could laugh at their goofiness naturally, a bit like some of the more successful Asylum or SyFy Channel outings. Instead, these play dumb from the start, and the ridiculous script doesn’t help. Sure, it has its moments, but for the most part there’s just something lacking.

MACHETE KILLS sees everyone’s favourite Mexican B-actor, Danny Trejo, playing a Bond-style character who’s sent on a secret mission by the US President (a well-cast Charlie Sheen). The story is preposterous, but there’s tons of action here, none of it particularly memorable however despite the OTT violence and effects. Instead, Rodriguez and co focus on delivering a non-stop array of star cameos, some of which work (Antonio Banderas, Tom Savini) while others are just annoying (Lady Gaga).