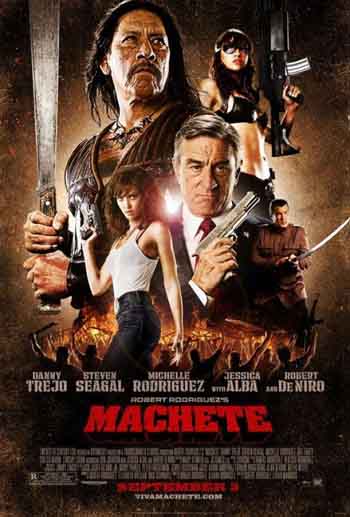 Story: After being set-up and betrayed by the man who hired him to assassinate a Texas Senator, an ex-Federale launches a brutal rampage of revenge against his former boss.

The cast is phenomenal though (M. Rodriguez, Jessica Alba, the latter has an infamous scene, I’m sure you’ll read quite a bit about it here, but Lohan plus 1 steal the show, “dressing”-wise) and while there is not much story here, it is told in a very nice fashion. There is a commercial (animated), that retells the “Machete” story in a funny way. And Danny Trejo tells the story (though you should watch the movie, because there are spoilers in it, of course).

You have to love Danny Trejo (who clearly enjoys being the center of attention, either in the movie or at conventions and deservedly so), if you don’t you might not enjoy the movie as much as other people do.