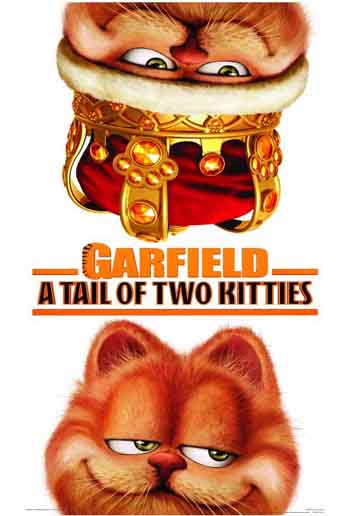 Story… Jon and Garfield visit the United Kingdom, where a case of mistaken cat identity finds Garfield ruling over a castle. His reign is soon jeopardized by the nefarious Lord Dargis, who has designs on the estate.

This movie is a really nice children’s story. I think the people that give bad reviews to this movie, are expecting an adult’s story. If you are expecting an intricate plot and character development, you should not see this movie. If you want to see a good story that kids will like, then see this movie. The story revolves around Prince (Curry) and Garfield (Murray). Tim Curry is foiling an evil executive’s plot, while Bill Murray is sneaking into Jon’s suitcase, classic Garfield antics. I think this movie is better than the first, solely because of Tim Curry’s voice-over. I like the intensely British-sounding voice. There are a lot of parts in this movie where Garfield and Prince work together to help the other animals and workers. Its an overall fun movie.

Here is a kid’s film that’s truly a kid’s film. I went because I am fan of Bill Murray’s (voice or otherwise) but I was pleasantly surprised. While this movie isn’t in the same class as Ice Age 1 or 2, it’s still rolls right along with it’s kid-centric silliness. Between Murray’s sarcastic Garfield and Meyer’s long-suffering Jon, the movie works. It’s nice to be able to take a kid to a movie like this now-a-days knowing that no one will get shot and that the language will stay reasonably clean. There will be some folks out there who will bored by this sort of thing but then again, they should remember that this is a KID’S MOVIE. Enjoy it for what it is.