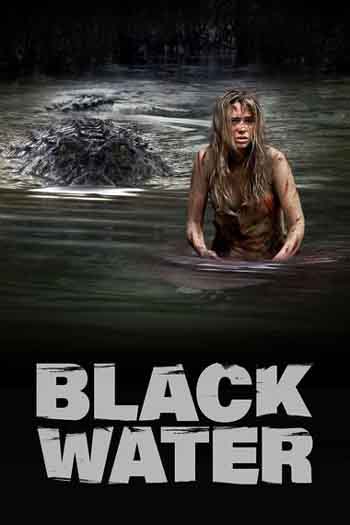 Black Water is directed and written by Andrew Traucki & David Nerlich. It stars Diana Glenn, Maeve Dermondy and Andy Rodoreda. Inspired by the true story of a crocodile attack in Australia’s Northern Territory, Black Water is another in the growing line of movies determined to stop holiday makers venturing to Australia! Not really of course, but one can be forgiven for thinking that this is one dangerous place given the number of serial killers, amphibian monsters and, erm, crazed Hogs that over the years from Oz have titillated the gore hounds up there on the silver screen.

The set up is very simple, two girls (sisters) and one boy (partner of the eldest sister) decide to take a boat trip whilst holidaying in Northern Australia. It’s not long before their boat is attacked by an unseen force and the three of them are thrust into a terrifying fight for survival in the mangrove swamps. Stuck up a tree-with no land reachable-and a giant beastie stalking them in the murky water, Black Water is going more for scary predicament than full thrust horror narrative. And it works….mostly.