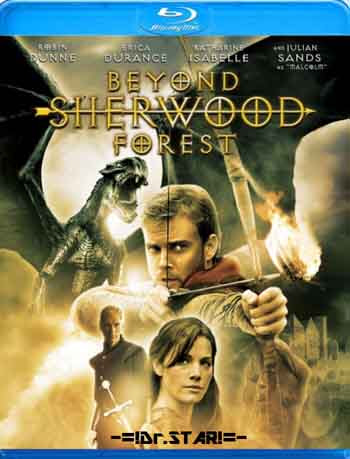 Story… England 1174: King Richard is away fighting the Crusade, his brother Prince John has been left in charge. In order to further international diplomatic relations with Austria, the beautiful young Maid Marian is to be married off to a prince. A cursed girl who can change into a ferocious dragon is used to find and pacify Robin Hood.

The SyFy channel go all-out with fantasy nonsense for this virtually unwatchable Robin Hood epic. Like those dodgy Asylum films that came out a few years ago that had Sherlock Holmes fighting octopi and the like, BEYOND SHERWOOD FOREST takes a very loose grasp of the original legend and turns it into something completely unfamiliar – and, unfortunately, very bad indeed.

You know the film’s off to a bad start when we’re subjected to silly portals in the woods and a lame CGI dragon that looks like it’s come from a computer game, but that’s just the beginning of the problems. The worst thing about the film by far is the acting; the likes of Robin Dunne (as Robin Hood) and Erica Durance (Maid Marian) are astonishingly poor and some of the supporting cast were even worse. The worst thing about the acting? Those accents, which grated on my ear throughout. It doesn’t help that the dialogue is reduced to the level of “Prithee, fair maiden” type nonsense.

The film muddles along, throwing in some half-hearted romance and plenty of scenes that copy the likes of ROBIN HOOD: PRINCE OF THIEVES, with Julian Sands delivering another hammy turn as the villain of the piece. Then, thankfully, it’s over, and I couldn’t be happier because the only thing truly monstrous about this production is that horrible CGI.