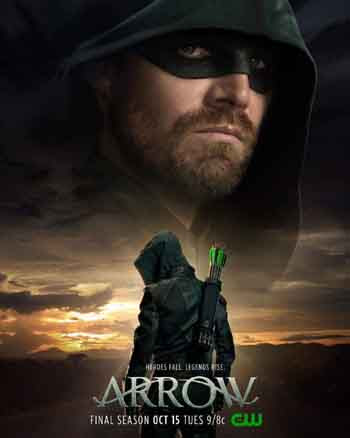 Story… Spoiled billionaire playboy Oliver Queen is missing and presumed dead when his yacht is lost at sea. He returns five years later a changed man, determined to clean up the city as a hooded vigilante armed with a bow.

So after 8 years we have finally come to the end of the DC show that started a huge universe of its own Arrow and here is my review for the 8th and final season of the show. The premise of the season sees Oliver Queen have to work with The Monitor in an attempt to stop the upcoming Crisis.

Main Character Stephen Amell has become known for playing the role of Oliver Queen/The Green Arrow and he does a great job in his last outing as the character. He gives a really emotional and dramatic performance as he struggles with the crisis that is coming and how he plays into it. I have always liked how this character has moved with the times, in a world with aliens and speedsters he acknowledges it and becomes a better character for it. It is also clear to see the development that his character has gone through from the first episode to the last one and it shows a really well crafted and well developed character.